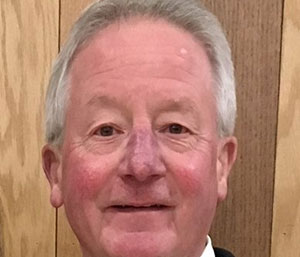 Samuel P. Nelson, a native Kentuckian, moved from Somerset to Lexington in1961, where he attended and graduated from the Sayre School and Transylvania University.  Sam met his future wife Elizabeth (Tootsie) while in the 8th grade at Sayre, and they were married in December of 1975.

After graduating from Transylvania with a degree in Business Administration, Sam spent 2 years with Central Bank & Trust Co. before Tootsie’s father, Stanley Demos, a legendary restaurateur in both the Cincinnati and Lexington markets, invited Sam to learn the restaurant business from the ground floor up at the iconic and award-winning Stanley Demos’ Coach House Restaurant in Lexington.

In 1985, Sam was appointed by Jerrico, Inc. Chairman Warren Rosenthal to lead the development of a full-service, casual-dining Italian concept.  From 1985 to 1989, the team opened a total of 7 Florenz Italian Restaurants in several Midwest and Southeast markets.

Sam & Tootsie purchased The Coach House Restaurant in 1989, continuing the tradition of excellence started by Mr. Demos.  Their hard work did not go unnoticed, and, in 1992, they were inducted into the prestigious Nation’s Restaurant News Fine Dining Hall-of-Fame.

Sam joined Fazoli’s in April of 1994 and became its first Franchise Business Consultant.  During the next 24 years, Sam held various positions, all within the franchise side of the business, eventually rising to Vice President, Franchise Recruitment & Development.  In 1998, Sam was presented with Fazoli’s “Servant Leadership Award”, the only recipient of this award in the Company’s history.

Throughout his 43 years in the restaurant industry, Sam served multiple terms on the Board of Directors for both the Kentucky Restaurant Association and the local Bluegrass Chapter.  During one of these terms in the 1970’s, Sam participated in the development of a local fund-raising event, “The Taste of the Bluegrass”, an event that still takes place annually, and raises scholarship money for Kentucky college students majoring in the fields of hospitality, food service & tourism.

Sam retired from Fazoli’s in March of 2018 and continues to reside in Lexington, where he and Tootsie remain full-time participants in the raising of their 3 grandchildren.