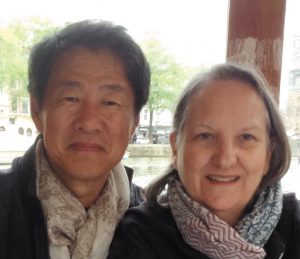 Kuni and Carol Toyoda have been restauranteurs, entrepreneurs and partners in multiple business enterprises for many years.  Both have had marinara running through their veins since May 15, 1990, when the couple formed Seed Restaurant Group and acquired a little 5-unit fast food restaurant chain in Lexington called Fazoli’s.

While Kuni was President and CEO of the new company, Carol was only one step behind.  With Kuni focused on operations, finance and marketing, Carol performed much of the critical behind-the-scenes work, including accounting, administration, training and other vital corporate support.  Together, they would build what would become the nation’s largest quick-service Italian restaurant chain.

It should come as no surprise that Kuni would achieve great success in the restaurant industry, as his hospitality DNA runs deep.  After earning a degree in Hospitality and Hotel Management from Southwest Minnesota State University, where he would later serve on the University’s Culinology & Hospitality Management Advisory Board, Kuni went on to become General Manager with Kahler Hotels, and then worked for General Mills Restaurant Group in the International Division of Red Lobster.  That role would eventually lead to his appointment with Lexington, KY-based Jerrico, Inc., where he worked on special projects within the Long John Silver’s International Division and helped franchise the brand overseas.

When Jerrico was sold in 1989, the new ownership group decided to sell its other concepts — including Fazoli’s – and in May, 1990, Kuni and Carol assembled an ownership group that acquired the 5 Central Kentucky Fazoli’s Restaurants.  Over the next 16 years, the brand would grow from 5 to over 400 units and develop a well-deserved reputation for quality, service, innovation, industry leadership and a people-first culture.

Perhaps Kuni’s early innovations were driven by business necessity.  The first 5 units were averaging $500,000 in sales in the early days and were in need of increased revenue if the brand were to become a viable growth vehicle.  In order to boost weekend traffic, Kuni added breadstick service for dine-in guests, along with unlimited breadsticks, and in short order sales and traffic increased significantly.   In fact, by late 1993 average unit sales exceeded the $1,000,000 mark.

As the brand expanded to Indianapolis and Orlando, unlimited breadsticks became a core brand attribute.  The still-popular “Sampler Platter” was introduced and “Fazoli’s Friendly Service” became the brand’s first movement away from “fast food” and towards a new “fast casual” brand segment that did not yet even exist.

The 1990’s were a decade of unparalleled growth for the brand.  In 1994 the corporate office moved to Palumbo Drive in Lexington to allow for more staff, followed by the opening of the 100th Fazoli’s in 1995.  1996 saw the introduction of Submarino sandwiches to the menu, which added another $100,000 to the chain’s average unit volume.  1997 and 1998 would prove to be the brand’s two biggest years for expansion, with the addition of 169 new restaurants over the two-year period.  1998 was also the year Pizza-Baked Spaghetti was introduced, attaining a 15.5% mix during the original promotion.

During this extended period of growth and success, the industry was taking notice as well.  National awards and accolades soon followed.

Throughout his tenure as CEO of Fazoli’s – and beyond – Kuni has been an industry leader and innovator.  While at Fazoli’s he developed concepts including Joe Mata’s, Submarino’s and Bella Notte.  He also enabled a people-first culture to drive business results and to that end established unique HR programs, including the Seeds of Compassion Fund, an internal charity for team members that, as of this writing, has distributed more than $650,000 in financial aid, along with the Dare to Excel Scholarship Fund ($1.7M distributed from 1994-2018), Seed Stock Plan and Managing Partner Plan.

After departing Fazoli’s in 2006 upon the sale of the company to Sun Capital Partners, Kuni and Carol embarked on a new restaurant adventure that has led them to even more innovation.  They continue to operate Bella Notte and have also developed new concepts including Nothing But Burgers, Crust, and Smashing Tomato  — the only Associazione Verace Pizza Napoletana certified restaurant concept in Kentucky and one of only 89 in the United States.