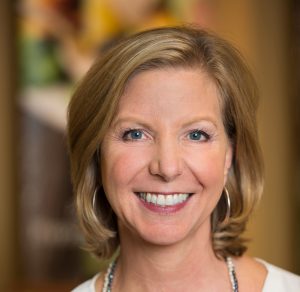 After earning her Bachelor of Science degree in Law Enforcement from Eastern Kentucky University, Kathy Watkins joined Lexington-based Jerrico, Inc. and began her food service career with the Long John Silver’s Seafood chain. When Jerrico Chairman and CEO Warren Rosenthal decided to develop a new “fast Italian” concept, Kathy didn’t hesitate to “jump the LJS ship” in 1987 to join the fledgling project. Not knowing what the new concept would be called, what would be on the menu, or even if the general public would accept “fast Italian”, Kathy climbed aboard and went to work well before the first Fazoli’s opened on North Broadway in Lexington, Kentucky. In fact, Kathy became the brand’s very first employee, serving as General Manager of the North Broadway location.

During her 19-year Fazoli’s career, Kathy would accomplish several other “firsts” as well, including becoming the brand’s first-ever Area Supervisor, first Director of HR and Training, first Group President of Training and Operations Services, and first Vice President of Organizational Learning and Communication. And all of those “firsts” meant Kathy found herself forging a path where there was no precedent to follow, and starting from scratch each time she took on new responsibilities.

Kathy was not only first in titles, but first in accomplishments as well. During her time at Fazoli’s she introduced the first-in-industry multi-media training platform for hourly restaurant staff, developed an industry-first language immersion program, and was an early pioneer and champion of diversity through a strategic partnership she developed with the Multi-Cultural Food Service & Hospitality Alliance. From culture enrichment to change management to unit- and multi-unit skill development, to operations prowess and expertise, Kathy’s presence and influence in all areas of the company’s business operations was always evident. During her tenure, Kathy’s training and development team supported a burgeoning Fazoli’s system that grew from 1 to over 400 restaurants. In order to sustain the organization’s growth trajectory, Kathy introduced various programs designed to prepare people for career advancement opportunities, from the Bravo training platform to GM Power School to Field Leadership Week. She became a certified instructor of Steven Covey’s “The 7 Habits of Highly Successful People”, and introduced the award-winning content into the core training curriculum for management.

In 2006, the year the Company was sold to Sun Capital Partners, Kathy was named Vice President of Learning and Development & Field Communications for Panera Bread, a position she would hold for the ensuing 12 years. Her leadership role with one of the largest and most successful restaurant chains in the nation included overseeing a staff of 100+, managing a budget of $15 million and developing and implementing training & development programming for 100,000+ employees. Kathy’s success in her high- impact, high-profile role reflected her broad industry expertise and afforded her opportunities to address many of the industry’s largest professional consortiums, including the Chain Operators Exchange (COEX), Multi-Unit Foods Service Operators (MUFSO) and the Council of Hotel and Restaurant Trainers (CHART).

Throughout her tenure at Panera, Kathy continued to excel in culture evolution, change management and leadership development for the nation’s 11th largest restaurant chain. She sponsored the “Mastering Performance” leadership development program that was cited as the company’s most impactful initiative of 2012, and developed the chain’s “Heart of Service” program that increased Guest satisfaction scores by 3%. She also created a change management model for Panera that was central to the brand’s successful “Panera 2.0” launch in 2015.

After 19 years at Fazoli’s and 12 years at Panera, in mid-2018 Kathy embarked upon a new challenge as Vice President of Training and Operations Services for California-based Johnny Rockets, where she oversees both domestic and international training teams, operations services and communications.