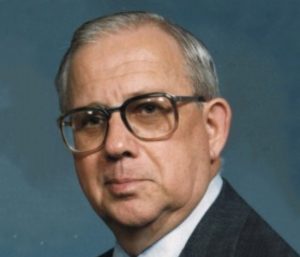 A native of Michigan, Mr. Renaud served two tours of duty with the United States Navy before graduating in 1957 from Michigan State University with a degree in Hotel, Restaurant & Institution Management.  Mr. Renaud’s long and illustrious foray into food service management began after graduation at MSU, where he was Food Service Manager for a 2,500-student campus dormitory.   In 1958, Ernie and his family moved to Chicago, where he managed business operations for the John R. Thompson Company, a local independent restauranteur who owned and operated brands that included Henrici’s, The Red Balloon and The Clock.

Ernie’s next opportunity took him to Norwalk, Connecticut, where he and his family lived while Ernie held various sales, advertising and marketing positions with New York City-based Sky Chef, the foodservice division of American Airlines.

In 1969, Ernie moved back to Chicago, where he worked for the Fred Harvey Company, the sixth largest food retail company in the nation at that time.

Then in 1971, Ernie moved to Lexington and began working for Jerrico, Inc. as Executive Vice President of Specialty Restaurants.  Just two years later, in 1973, Ernie was promoted to President of Long John Silver’s Seafood Shoppes.  Then, in 1982, Ernie took on additional responsibility as President of LJS parent company, Jerrico, Inc.

In 1984, after a thirteen-year run at LJS, Ernie pursued a new opportunity as President of Investors Management Corporation in Raleigh, NC, which operated Golden Corral Steak Houses.  He remained there until 1988, when he was named President and CEO of the 1,000-unit Church’s Chicken chain in San Antonio, TX.  Within a year after Ernie’s arrival at Church’s, the chain was the subject of a hostile takeover attempt, which eventually led to the acquisition of Church’s by New Orleans-based Popeye’s Famous Fired Chicken and Biscuits.  Ernie left the newly combined chicken empire and served as President of Skat’s Restaurants in Rocky Mount, NC, for a brief time before being called back to serve as Acting President of Popeye’s/Church’s in 1991.

Ernie’s long and illustrious career in the food service industry spanned over 50 years and took him to the pinnacle of leadership for several of the industry’s largest chains.  At last count, Ernie had developed, or assisted in the development, of 25 restaurant concepts during his expansive career. He was a well-respected and well-liked leader, as evidenced by the numerous industry awards he won, including the “MUFSO Golden Chain Award” in 1981 and the prestigious “Silver Plate Award” in 1982 from the International Food Service Manufacturer’s Association.

Sadly, Ernie passed away on May 23, 2016 at the age of 88 and is being posthumously honored and inducted into Fazoli’s Hall of Fame.  Ernie was preceded in death by his wife of 62 years, Mary Renaud, and is survived by his 5 children (Mejie, Jack, Tom, Dan and Larry) and 4 grandchildren.