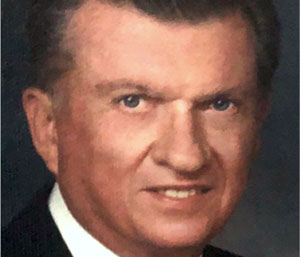 Mr. Hollabaugh was born in Baton Rouge, Louisiana in 1933.  He graduated from Baton Rouge High School in 1951, followed by Louisiana State University in 1955.  That same year, he married his wife Sylvia, whose marriage would span sixty years until Denver’s passing in 2015 at the age of 82.

After marrying Sylvia, Denver joined the United States Air Force in 1956 and was a pilot until 1960.  After serving his country, he began a 7-year engagement as a pharmaceutical representative with Roerig, a division of Pfizer.

Denver’s long-standing dream of owning his own business became a reality in 1967 when he bought his first restaurant – a Burger King – in Arlington, Texas.  Denver would become one of the longest (if not the longest) tenured Burger King franchisees in that brand’s entire system.  He would go on to open more than 25 restaurants of various concepts throughout his illustrious food service career.

Denver opened his first Fazoli’s in Lubbock, Texas in 1997, then opened his second unit in Amarillo, Texas in 2000.  Perhaps not surprisingly, the Amarillo location amassed sales of $2.8 million during its first twelve months of operations, indicative of the success, awards and accolades that Denver’s PastaQuik franchise organization would compile during his eighteen- year association with the brand, including:

Denver was baptized at the age of 12 during a revival in Baton Rouge.  He was a devout Christian and long-time member of First Baptist Orlando Church.  He is remembered by family, friends and business associates as a family-oriented and caring man who inspired those around him, galvanized loyalty and shared his success with others.