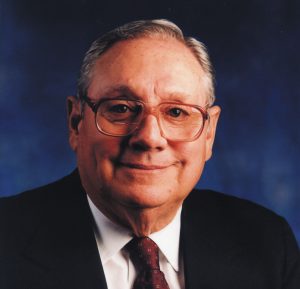 Warren W. Rosenthal is a native of Paducah, Kentucky, and a graduate of the University of Kentucky.  He is the owner of Patchen Wilkes Farm, a thoroughbred horse farm in Lexington, Kentucky.

Mr. Rosenthal’s primary business career spanned 41 years in the foodservice and franchising industries.  He joined Jerrico, Inc. in 1948 when it consisted of two five-cent hamburger stands called White Taverns and one eight-stool Jerry’s sandwich shop.  He became chief executive officer in 1952 and president of the company 1963.

From three small restaurants in 1948, he guided Jerrico, Inc. into becoming a publicly-owned company in 1969 growing to its 1989 status of over 1,500 Long John Silver’s Seafood Shoppes in 37 states and 2 foreign countries, over 60 Jerry’s Restaurants, full-service family coffee shop restaurants and 5 Fazoli’s Italian restaurants, all of which he originated.  He retired as chairman of the board of Jerrico, Inc. in 1989 when the company was the object of a takeover.

Bored after 32 days of retirement, Mr. Rosenthal joined Ralph Gabbard of Lexington and Glenn Pennington of Berea in the ownership of Renfro Valley Entertainment Center, the home of the Renfro Valley Barn Dance, a country music venue which, as the surviving partner, he ultimately donated to the Kentucky Country Music Hall of Fame Museum in July 2000.

In addition to his business-oriented activities, Mr. Rosenthal has found time to devote service to his community.  He was instrumental in establishing a discipline for Hotel and Restaurant Management at Transylvania University in Lexington, Kentucky.  He is a Emeritus member of the board of trustees of Transylvania University.

Among his awards and honors:  In 1971 he was the national recipient of the MUFSO (Multi-Unit Food Service Operators) Man of the Year award.  In 1975 he received the foodservice industry’s premier honor, the Gold Plate Award, presented in recognition of his standard-setting leadership and accomplishments as a foodservice operator, as well as his civic and community contributions.

He was named “Outstanding Citizen of the Year” in 1978 by the Greater Lexington Area Chamber Commerce.

He received in 1977 the Transylvania Medal awarded only to non-alumni who have contributed outstanding service to the college.

In September 1979, the Spirit of Life Award was presented to him and a Research Fellowship was established in his name at the City of Hope, a pilot medical center.

In May of 1983, the President of Iceland presented Mr. Rosenthal with the Icelandic Order of the Falcon, the highest award presented to anyone other than heads of state and royalty.

He holds honorary Doctorate Degrees from the University of Kentucky, Transylvania University and Eastern Kentucky University.

In 1985, he was presented the Hall of Fame Award by the International Franchise Association for his pioneer leadership in and contributions to franchising.

In 1985, The National Institute for the food service industry presented a testimonial in recognition of his leadership and distinguished service as its President 1982-1985.

In 1986, the National Institute for the Foodservice Industry honored him with the election to its College of Diplomates in recognition of his important contributions to education in the foodservice industry.

In 1986, Paducah Community College and Paducah Junior College saluted Rosenthal with its first Alumni Award as an outstanding student and for his faithful and continued support.

He was presented the Humanitarian Award by the Center for Molecular Medicine & Immunology in 1986.

In 1988 the Lexington Theological Seminary recognized him for his generosity in establishing The Franklin B. Moosnick Lectureship in Judaic Studies.

On April 27, 1990, he was awarded the Optimist Cup for service to the community of Lexington.

In 1994 he was named to the University of Kentucky College of Business and Economics Hall of Fame.

In 2001 he was awarded the David A. Sayre Medallion by Sayre School.

In 2006 he was awarded the Lifetime Achievement Award by Junior Achievement of the Bluegrass.

In 2007 the Kentucky Historical Society honored him by the naming of the Warren and Betty Rosenthal Permanent Exhibit Hall at the Thomas D. Clark History Center.  He also received a 2007 Outstanding Community honoree award.

In 2008 he was recognized by the Happy Chandler Scholarship Foundation with Award of Excellence.

In 2010 he was in the first class of inductees for the Kentucky Entrepreneur Hall of Fame Class of 2010.

In 2011 was awarded the Danny R. Ford Distinguished Service Award by the Kentucky Music Hall of Fame and Museum.

In 2012 he was received Transylvania’s Charles and Susan Shearer Award for his tireless involvement and generosity to Transylvania University.

In 2014 he was honored by the American Heart Association for efforts to fight heart disease and strokes.

In 2014 he received the W. T. Young Humanitarian Award from the Kentucky Thoroughbred Owners & Breeders Association.

In 2015 he received the Distinguished Philanthropist Award.